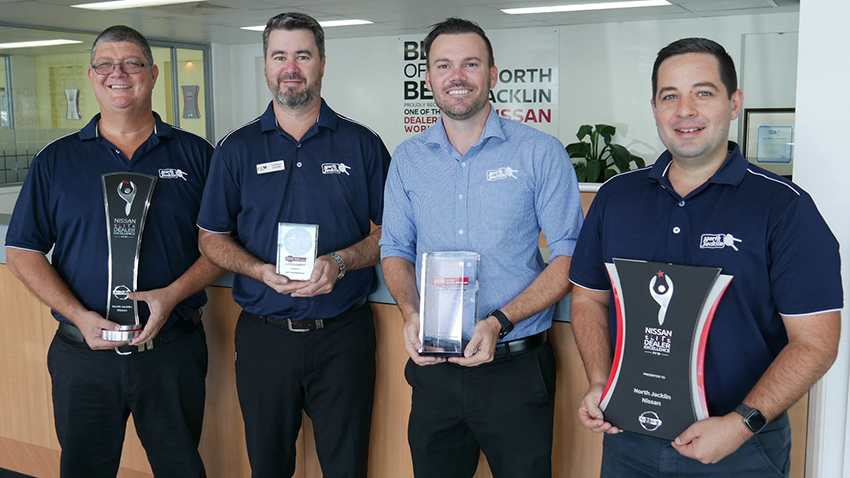 A MACKAY business has been ranked number one in the nation for the fourth time after another hugely successful year in the caryard.

North Jacklin Motor Group has proven a whole of dealership approach to customer service is the key to success after being awarded Nissan’s ELITE Master Dealer award for FY20.

Outperforming 28 other Nissan dealerships across Australia in the provincial category, North Jacklin Motor Group’s general manager John Nash Jnr said the Mackay dealership had to exemplify excellence in all facets of business to nab the win. The business was also awarded a Nissan ELITE Dealer Excellence Award to accompany the top title – accolades the team worked hard for.

“Winners are required to embody the philosophy and vision for Nissan to provide customers with an outstanding ownership experience – from the showroom through to every aspect of the dealership operation,” Mr Nash said.

“It feels great to win this award because as a team, this is something we focus on for the entire year.

“For that hard work to pay off and to claim the top spot nation-wide is really rewarding for the entire team.”

All departments must perform to a high standard and “tick all the boxes” to qualify for a Nissan ELITE Dealer Excellence award. Mr Nash said the scoring methodology was rigorous and the dealership’s win was reflective of the incredible dedication of his staff.

“For me it always comes back to our staff, we have a lot of quality long-term staff who are passionate about the industry,” he said.

“Our staff and their approach to customer service is what sets the North Jacklin Motor Group apart from other dealerships.”

While the Nissan ELITE Master Dealer Excellence award is the highest award given to a Nissan dealership, Mr Nash said winning the prestigious title did not mean the team would stop striving for more.

“We have won this award four out of the past five years, so our focus now turns to achieving this same result again for the new financial year.”

North Jacklin Motor Group was founded in 1961 and the Gordon Street dealership specialises in both Nissan and Subaru, with a second car yard selling Mitsubishi, Honda, Mercedes-Benz and Suzuki.

The growing business has expansions on the horizon including a potential new service facility in Moranbah and the Whitsundays.